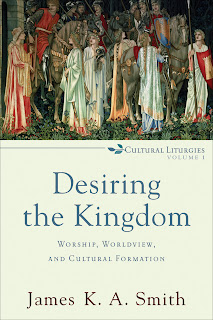 So, I guess my little “Open Letter to Praise Bands” generated some interest. I’m glad that it could be a catalyst or foil for some intentional reflection on the how of Christian worship. I won’t even attempt to address the array of responses it has generated. I’m content to let some misreadings spin themselves out. So I’m not out to police the ways I’ve been misunderstood.

However, I do think it’s important to name an issue in the background that affects how we can have this conversation: not all Christians share the same theology of worship. Indeed, my concern is that some sectors of North American Christianity don’t have much of a theology of worship at all. Many of us–including many congregations–have only an implicit understanding of what worship is, and we have not always made that explicit, nor have we subjected our assumptions to rigorous biblical and theological evaluation.
It is my passion for theological intentionality about worship that generated my book Desiring the Kingdom: Worship, Worldview, and Cultural Formation. It’s not fair to ask those who read a blog post to read an entire book, but I would invite those who both agreed and those who disagreed with my “Open Letter” to consider Desiring the Kingdom as a fuller articulation of the theology of worship behind my criticisms.
Many of the negative reactions to my missive stem from a fundamentally different understanding of what worship is. That means we are working from fundamentally different starting points. So when someone thinks that I “misunderstand” what’s happening in worship, actually I just disagree with the assumptions behind such worship.
I think this is why some have missed two crucial points in my “Open Letter”–points that were admittedly touched on just briefly. Let me reiterate them here:
1. Worship is not only expressive, it is also formative. It is not only how we express our devotion to God, it is also how the Spirit shapes and forms us to bear God’s image to the world. This is why the form of worship needs to be intentional: worship isn’t just something that we do; it does something to us. And this is why worship in a congregational setting is a communal practice of a congregation by which the Spirit grabs hold of us. How we worship shapes us, and how we worship collectively is an important way of learning to be the body of Christ. (For a helpful account of how our congregational practice of singing embodies the oneness of the body of Christ, see Steve Guthrie’s marvelous chapter, “The Wisdom of Song.”)
2. Because worship is formative, and not merely expressive, that means other cultural practices actually function as “competing” liturgies, rivals to Christian worship. In Desiring the Kingdom, I analyze examples of such “secular liturgies,” including the mall, the stadium, and the university. The point is that such loaded cultural practices are actually shaping our loves and desires by the very form of the practice, not merely by the “content” they offer. If we aren’t aware of this, we can unwittingly adopt what seem to be “neutral” or benign practices without recognizing that they are liturgies that come loaded with a rival vision of “the good life.” If we adopt such practices uncritically, it won’t matter what “content” we convey by them, the practices themselves are ordered to another kingdom. And insofar as we are immersed in them, we are unwittingly mis-shaped by the practices.
Again, there’s much more to be said about this, and a blog isn’t the venue. I do invite those who have been prompted to think about these matters to consider Desiring the Kingdom as a way to continue the conversation.