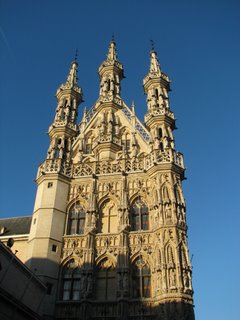 I just returned from a fabulous conference at the Katholieke Universiteit in Leuven, Belgium on “Augustine and Postmodernism: A New Alliance Against Modernity?” (9-11 November), hosted by Lieven Boeve and Tom Jacobs–who did a wonderful job both pulling together a stimulating team of scholars for this colloquium, and then providing unparalleled hospitality that nourished our conversations. Here are just a few pictures and reflections.

Leuven, a late medieval city in the Flemish part of Belgium, is a very short train ride from Brussels. The Katholieke Universiteit (Catholic University)–is a core feature of the town and students are everywhere. It is very much a “university city” and given its size and history, it reminded me of Cambridge in many ways. Pictured here is the famous Town Hall of Leuven, a quintessentially Gothic structure completed in 1468.

Leuven’s Faculties of Theology and Philosophy are internationally esteemed. The theology 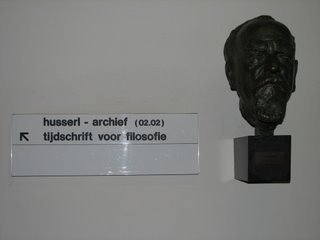 faculty made a mark on Vatican II (indeed, some of the conversations at our conference circled back to consider just what was at stake at the council and what it would mean to continue–or contest–that legacy) and has continued to generate important work, including recent engagements with postmodernity. The Institute of Philosophy is home to the Husserl Archives and has for decades been one of the premier influences on contemporary phenomenology. So it was a treat for me to make a bit of a ‘pilgrimmage’ to the Husserl Archives while I was there.

An unanticipated treat was Belgian cuisine. Our hosts showed us a wonderful time in local establishments. While I came with high expectations for Belgian beer (I learned that Stella Artois constitutes the dregs of Belgian beer that they send to us in the America, saving the best stuff for themselves!), I enjoyed several excellent dining experiences. These included a tantalizing pork dish (covered with Danish blue cheese) on Friday night, followed with a Saturday lunch of steak, peppercorn cream sauce, frites (which the Belgians, not the French, invented!), and a glass of Duvel. This was topped off when I visited some new friends, the Micheners, on Saturday in the Wallonie (French-speaking) region of Belgium (just south of Leuven). There I enjoyed “raclette,” which is both a kind of cheese and a mode of preparation: cheeses, meats, and vegetables prepared in a central table-top grill, then poured over Belgian potatoes and complemented by French wine. Yeah, the airline food the next day was, er, a bit of a step down from all that!

The conference conversation–focused on the role that Augustine plays (should play, could play) in contemporary theology and, in particular, theological accounts of cultural engagement–was top-notch and stimulating. The conference was organized as what they described as an “expert colloquium”–a sort of closed-door roundtable discussion with a few folks listening in. Some of the other speakers including two of my former teachers (Robert Dodaro from the Augustinianum in Rome and Anthony Godzieba from Villanova) as well as folks like Fergus Kerr and Emmanuel Falque (from the Institut Catholique in Paris), and several very sharp younger scholars (including Holger Zaborowski). The proceedings of the conference will be published next year. But most importantly, the conversation–at times animated–really helped me to crystallize some of the key issues I need to think about as I’m trying to develop an Augustinian political phenomenology.

One of the other delights of being in Belgium was getting to know the good folks at the Evangelical Theological Faculty on the south side of Leuven. Having briefly met Ron Michener once before, I enjoyed a morning of conversation with Ron, Patrick Nullens, Filip Cavel, and a couple of other doctoral students about the challenges and opportunities for evangelical theology in Europe.