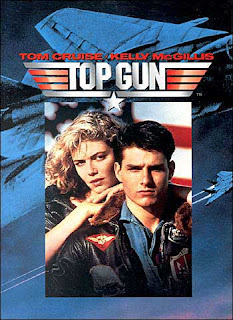 It’s almost disturbing how many times in a day I find quotes from Top Gun making their way to the tip of my tongue. (This is one of the aspects I recall from The Reluctant Fundamentalist: how young financial analysts spoke in Top-Gun-ese to one another with such fluency and understanding, like a secret language insulated from generations ahead and behind.)

Sadly (why “sadly?”), I don’t think any movie seeped into my conciousness (and unconscious) like Top Gun. Even now, I can’t resist the allure when it’s playing on TBS. A couple of years ago I made a pilgrimmage to the bar in San Diego which was home to the famous “carnal knowledge” scene. Indeed, it was a treat for me to introduce my two older boys to the movie about a year ago–though I think they remain puzzled my its special spell on me (what’s their Top Gun?).

What is it about the movie? How is it that Tom Cruise still seems to just ooze cool when I watch it (leaving Kelly McGillis hanging in that elevator scene)? That Goose seems like a friend to die for, whose own death is heartbreaking? Or is it the fact that this was the first silhouette of a kiss I saw that involved a tongue (!)? I confess I lack any critical capacity on these questions. It’s too close to me–too tightly woven into the warp-and-woof of my memory and self-understanding.

Indeed, it shapes my language. The quips and tropes of the movie come to me like the cadences of the Book of Common Prayer. Whereas my younger brother, fascinated with weapons and war, could quote every bit of dialogue from First Blood, I absorbed the dialogue of Top Gun like a second language. What a treat, then, for me to find this page at IMDB.com which, in archiving “memorable quotes” from the movie, seems to pretty much cover the entire film. It’s hard to select any particular favorites, but who can forget:

or this exhcange (followed by Val Kilmer’s weird jaw clench):

Iceman: You two really are cowboys.
Maverick: What’s your problem, Kazanski?
Iceman: You’re everyone’s problem. That’s because every time you go up in the air, you’re unsafe. I don’t like you because you’re dangerous.
Maverick: That’s right! Ice… man. I am dangerous.

These and a hundred others could roll off my tongue without thinking about it. I suppose the only thing that’s “sad” about this is that the Psalms don’t come to my lips nearly as easily.