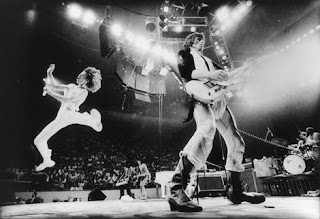 I sometimes tease my wife that we’re from completely different generations because she was born before man walked on the moon, while I was born after that paradigm-shifting event (we’re only 18 months apart). She emerged into this world in the 60s, whereas I was born in a different decade. (I should note she’s not always amused by this line of teasing.) Of course, it’s ridiculous to think that a year and a half could mean that we’re from different epochs. And yet surely one of the features of late modernity is a compression of generations where cultural paradigms shift at now breakneck speed.

Dan Chiasson gets at this as a bit of an aside in his ranging review of Keith Richards’ Life. Chiasson does a nice job of situating Richards’ offering in the wider genre of memoir, but in the course of this he also considers just how and why the Stones were game-changers in the very shape of cultural offering. As he puts it:

Anyone reading this review can go to YouTube now and experience Muddy Waters, or Chuck Berry, or Buddy Holly, or the first Stones recordings, or anything else they want to see, instantly: ads for Freshen-up gum from the Eighties; a spot George Plimpton did for Intellivision, an early video game. Anything. I am not making an original point, but it cannot be reiterated enough: the experience of making and taking in culture is now, for the first time in human history, a condition of almost paralyzing overabundance. For millennia it was a condition of scarcity; and all the ways we regard things we want but cannot have, in those faraway days, stood between people and the art or music they needed to have: yearning, craving, imagining the absent object so fully that when the real thing appears in your hands, it almost doesn’t match up. Nobody will ever again experience what Keith Richards and Mick Jagger experienced in Dartford, scrounging for blues records. The Rolling Stones do not happen in any other context: they were a band based on craving, impersonation, tribute: white guys from England who worshiped black blues and later, to a lesser extent, country, reggae, disco, and rap.

When the situation changed in part because the Stones changed it, and suddenly you could hear (and even meet and play with) Chuck Berry or Bo Diddley, the band lost its way. They depended, for their force, on a body-memory of those early cravings for music they knew only by rumor and innuendo. Other cravings, for drugs and fame, were not sufficient, and had much more dire downsides. The early Stones were in a constant huddle, dissecting blues songs in front of the speakers and playing them back for each other and then for their few fans. They thought of themselves, not even as a band, really, but as a way of distributing music the radio never played.