I’m continuing to live with David Foster Wallace quite a bit. Following his reflections on the tyranny of irony, consider what he says later in the same essay:

“The next real literary ‘rebels’ in this country might well emerge as some weird bunch of anti-rebels, born oglers who dare somehow to back away from ironic watching, who have the childish gall actually to endorse and instantiate single-entendre principles. Who treat of plain old untrendy human troubles and emotions in U.S. life with reverence and conviction. Who eschew self-consciousness and hip fatigue. These anti-rebels would be outdated, of course, before they even started. Dead on the page. Too sincere. Clearly repressed. Backward, quaint, naive, anachronistic. Maybe that’ll be the point. Maybe that’s why they’ll be the next real rebels. Real rebels, as far as I can see, risk disapproval. The old postmodern insurgents risked the gasp and squeal: shock, disgust, outrage, censorship, accusations of socialism, anarchism, nihilism. Today’s risks are different. The new rebels might be artists willing to risk the yawn, the rolled eyes, the cool smile, the nudged ribs, the parody of gifted ironists, the ‘Oh how banal.'” (p. 81).

One might wonder whether, already in 1990, DFW had foreseen the coming of David Eggers, Jonathan Safran Foer, Nicole Krauss, even Jonathan Franzen–whether Wallace had prophesied what Melvin Jules Bukiet would later pan as the “Brooklyn Books of Wonder.” There is a certain “sincerity” to their work that can look almost naive and quaint alongside Pynchon and even Wallace himself. But perhaps that is their (relative) rebellion. (This reminds me of Zizek’s aside about straight marriage as “the most dark and daring of all transgressions.”)

I think Wallace “gets” how novelists could head in this direction. And yet, the prose of Franzen and Krauss does feel so flat and predictable and, well, “straight-forward” after the experimentalism of DFW. No doubt avant-garde form can become tiresome and self-conscious, but it also seems to me that we can’t just return to the narrators and forms of Updike either. The omniscient narrator has died; any revivification of him (sic) is not a resurrection, but only a zombie. 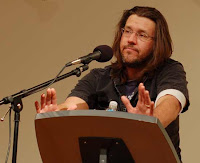 While, in my last post, I was praising David Foster Wallace’s writing and voice–a “formal” praise–he is (was, sadly) also stunningly brilliant, even prescient. For example, consider just one of the essays in A Supposedly Fun Thing I’ll Never Do Again, “E UNIBAS PLURAM: Television and U.S. Fiction,” which is something of a metacommentary on the impact of television on fiction–and more specifically, young fiction writers–written in 1990. (Keep that in mind: this is 1990; there’s no discussion of the internet in here, only futuristic talk of TC cables connecting computers by fiber optic lines–like a scene straight out of Infinite Jest.)

It is a long, winding essay, with continual payoffs. Central to his argument (helpfully noted in a section subtitled, “I do have a thesis”) is the recognition of the self-consciousness, ironic layering of television, such that television had already beat postmodern novelists to the punch. The general cultural ethos, then, is shaped by “irony, poker-faced silence, and fear of ridicule.”

In lieu of a long commentary, let me just give you a taste of Wallace’s claims and criticism, which I think are only more true today. For example, consider this little meditation on fear of ridicule:

“And to the extent that it [TV] can train viewers to laugh at characters’ unending put-downs of one another, to view ridicule as both the mode of social intercourse and the ultimate art-form, television can reinforce its own queer ontology of appearance: the most frightening prospect, for the well-conditioned viewer, becomes leaving oneself open to others’ ridicule by betraying passé expressions of value, emotion, or vulnerability. Other people become judges; the crime is naiveté. The well-trained viewer becomes even more allergic to people. Lonelier” (p. 63).

Thus the dispassionate aloofness of a generation of passive viewers:

“In fact, the numb blank bored demeanor–what one friend calls the ‘girl-who’s-dancing-with-you-but-would-obviously-rather-be-dancing-with-somebody-else’ expression–that has become my generation’s version of cool is all about TV. […] Indifference is actually just the ’90’s version of frugality for U.S. young people: wooed several gorgeous hours a day for nothing but our attention, we regard that attention as our chief commodity, our social capital, and we are loath to fritter it” (p. 64).

This is then followed by a similar phenomenology of irony, of which a slice here:

“The assumptions behind early postmodern irony…were still frankly idealistic: it was assumed that etiology and diagnosis pointed toward cure, that a revelation of imprisonment led to freedom. [Rortyan irony?] So then how have irony, irreverence, and rebellion come to be not liberating but enfeebling in the culture today’s avant-garde tries to write about? One clue’s to be found in the fact that irony is still around, bigger than ever after 30 long years as the dominant mode of hip expression. It’s not a rhetorical mode that wears well. As Hyde (whom I pretty obviously like) puts it, ‘Irony has only emergency use. Carried over time, it is the voice of the trapped who have come to enjoy their cage.’ This is because irony, entertaining as it is, serves an almost exclusively negative function” (pp. 66-67).

“Make no mistake,” he concludes: “Irony tyrannizes us.”

The book from my summer reading that probably most affected me was David Lipsky’s Although Of Course You End Up Becoming Yourself: A Road Trip with David Foster Wallace. While Lipsky’s voice is a bit irritating, and while the book feels like a sort of theft on Lipsky’s part, the transcript of a 5-day of conversation with Wallace is riveting. I read this after working through a number of stories in Oblivion (“Good Old Neon” is incredible), as well as his non-fiction (A Supposedly Fun Thing I’ll Never Do Again and Consider the Lobster) and I’ve now noticed this:

Reading DFW gives me a sense of permission to write in a way that sounds like the voice in my head.

I don’t know if that’s a good thing, objectively speaking. It won’t make me any friends with James Wood & Co. But I have found this to be liberating, energizing, and just generally encouraging. I feel like Wallace has loosened my tongue in a way, and I’m grateful.