5. James Frey, Bright Shiny Morning. OK, let me explain a little back story here: first, I found myself sequestered in a Target store, looking for anything to distract me. Second, anyone who has lived in Los Angeles can attest that the cover image on the hardcover of this book intangibly captures the strange light of a crystal-clear L.A. morning. So then third, when I opened the book looking for distraction, within a few pages I was hooked by Frey’s colloquial minimalism, though this is probably partly due to nostalgia: the novel describes spaces in L.A. that used to be home for me. So this novel was a way of returning. But for a novel that’s probably mediocre at best, Frey does an excellent job of capturing the overwhelming ugliness of Los Angeles–something that would surprise those who know it only from its glitzy PR tentacles in Hollywood and television. Frey is a cartographer of the strip mall geography that is southern California, and an anthropologist of its underbelly.

4. Martin Amis, The Pregnant Widow. An aging hedonist reconsiders an Italian bohemian romp in the summer of 1970, zooming out to assess the so-called “sexual revolution” on a larger scale–all constructed around the story of Narcissus as told in Ted Hughes’ rendering in Tales of Ovid. The perfect platform for Amis’ cutting humor and curmudgeonly criticism. The image of the “pregnant widow” is itself suggestive of a strange transition: impregnated by a father no longer alive, the impending child will emerge in a world fundamentally different from the one in which he was conceived. The novel is perhaps at its best when it morphs into a reflection on aging.

3. Rafael Yglesias, A Happy Marriage. I read this after hearing Yglesias on NPR, and in light of teaching a course on marriage, family, and singleness. It is the story told from two ends, cutting back and forth between two periods until they converge: the beginning of their marriage and the end of his wife’s life, dying of cancer. The mechanics of this back-and-forth work very well. But the “novel” tracks frustratingly close to Yglesias’ own experience with his dying wife so I found myself constantly falling into the trap of reading it as if it were a memoir (sort of the inverse of Frey’s Million Little Pieces). Furthermore, on the mechanics front, while this is written in the third person, we don’t get any interior insight into any characters except Enrique, the husband. So this is turns out to be a Bob Dole narrator, Enrique talking about himself in the third person. This might also explain the blurring between memoir and novel: Yglesias perhaps thought shifting to an omniscient narrator makes it a novel, but this narrator is still functionally Enrique (aka Yglesias).

But despite those frustrations with form, the story is an honest portrait of the slog that is a marriage, with all its frustrations and joys. Enrique steps up when it counts and unfortunately only learns what it means to be married in the final moments of their story together. We are made privy to Enrique’s unfolding revelations of the gift he’s been given in Margaret, and one begins to see why marriage is a sacrament.

2. Jonathan Franzen, The Corrections. Finally. I knew Freedom was on its way, and came to appreciate the friendship and collaboration between Franzen and DFW, so that also got me intrigued. Overall, I’d have to say I was disappointed with Franzen as a stylist (why am I always still looking for Updike?), but was impressed with his narrative abilities. Having come to Franzen from Wallace, the structure seemed pretty pedestrian, but when you step back and compare to others, there’s some creative framing of time, and the discrete narratives focused on characters (first Chip, then Gary, then Enid & Alfred, finally Denise) are brought together in a satisfying way in the final “act” as it were.

I think what most sticks with me is Franzen’s ability to capture the essence of “midwesternness.” While Enid & Alfred embody this, one also sees how this “midwesternness”–its sense of duty, its repression, its guilt–infects even the children who’ve made it to the coast. You can take the child out of the midwest, but… 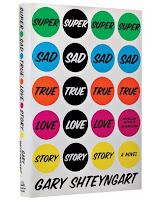 1. Gary Shteyngart, Super Sad True Love Story. My favorite read of the year. As I said earlier: A quirky, prescient story set in the not-too-distant future. Comprised of the diary of Lenny Ambramov, interspersed with the “GlobalTeens” (aka Facebook?) communications of his girlfriend, Eunice Park, the book extrapolates from our current cultural trends to imagine the future dystopia of what will be left of the United States, or more specifically, New York City. It is a world where people are publicly identified by their Credit Ranking, where nation-states have been replaced by corporations (compare Atwood’s Year of the Flood, and where the United States has become entirely enfolded into China (with sections parceled out to Norway).

Shteyngart’s social commentary is oblique and allusive, again projecting from our current cultural habits into an imagined future. One might describe it as the ubiquitization of a Facebook sensibility, where everything is made public–our Credit Rankings are displayed on “credit poles” that line the street; our emotions and thoughts are made public on äppäräts dangling from our necks; and nothing is left to the imagination as all the young women are wearing transparent “onionskin” jeans.

The story also tackles the identity issues of the 1.5 immigrant generation: Lenny the child of Russian Jews but raised on Long Island; Eunice the daughter of Korean Christians, raised in southern California, transplanted to New Jersey. And in the midst of all of this, Lenny works for a company that is sorting out the science of immortality. Fertile soil for philosophical and theological reflection.

The novel combines strong narrative force with exquisite attention to detail. There are a couple of mechanical moves late in the book that I found lazy and a bit disappointing from a formal standpoint, but these don’t obscure its strengths. I hope to write much more on the novel elsewhere.